How can we help you today?

How to Use Magento Corediff on Hypernode

Magento Corediff is an open source tool to quickly find unauthorized modifications in a Magento 1 or 2 install. It compares each line of code in your webshop with a database filled with millions of lines of trusted code, showing you exactly what code your webshop contains that isn't supposed to be there.

Corediff was created by Sansec, specialists in Magento security and digital forensics since 2010.

If you're running Magento 1, you will need to change the path from /data/web/magento2 to /data/web/public

You can also have corediff scan all code, instead of just known Magento paths, by including the --ignore-paths argument.

Hopefully the scan doesn't return any modified files. If it does, you will need to see if these modifications are purposely made changes to your Magento core files made by your own developers, or malicious code made by cybercriminals. How to tell the difference between these two is something that falls beyond the scope of this document, but is something your developers should be able to do. 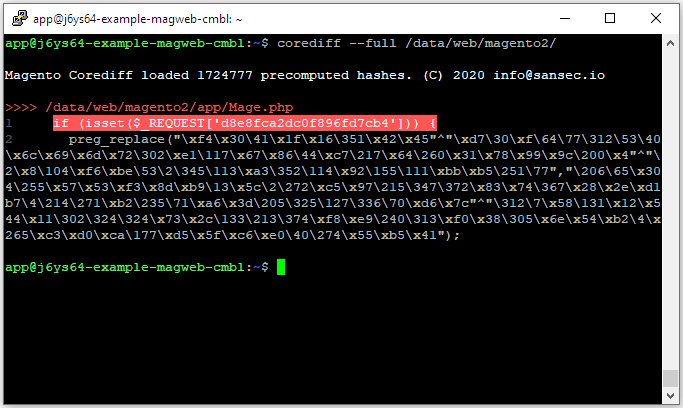 In the example above, you can see that the file /data/web/magento2/app/Mage.php contains two lines of code that have not ever been seen before in any version of Magento. A cursory glance quickly teaches us that this is malicious code, waiting for specific arguments to be passed containing remote code to execute, a technique often used by malicious actors.

If you do end up finding malicious code, we advise you to follow our guide on recovering a hacked magento shop.

Did you find it helpful? Yes No

Send feedback
Sorry we couldn't be helpful. Help us improve this article with your feedback.